My Grandpa – A Member of the Gestapo?

When cleaning up their family’s garden house Jörg Philipp and Detlef Mattis discover a securely closed box with personal documents of their grandfather Julius Schimann, whom they’ve never met personally. Amongst the many pictures they find some which show him close to Adolf Hitler.

At the time of the GDR, the grandfather was a taboo subject in the family, as he had been arrested after World War II by the Soviet secret service and sentenced to ten years in prison during the Waldheim trials. The accusation: being a member of the Gestapo. The “Secret State Police” was one of the most important instruments of terror of the Nazi regime. Julius Schimann died of tuberculosis in 1953, shortly after the pronouncement of judgement.

After decades of uncertainty his grandsons now want to fill the important gaps of their family history: Was their grandfather really guilty, was he involved in war crimes? Or was he a tragic victim of the GDR’s post-war justice?

Jörg Philipp and Detlef Mattis search for traces of their grandfather. They get a surprising hint at the Buchenwald Memorial, where Schimann served his sentence in a Soviet special camp after the end of the war: the Stasi. The “Ministry of State Security” of the GDR had its own secret NS archive with countless files of Nazi perpetrators.

For Jörg Philipp and Detlef Mattis it is an upsetting and moving reconstruction of a number of their grandfather’s life stages, always driven to learn more and to understand who he really was. 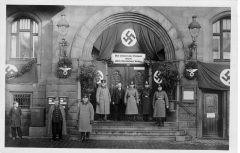 Trace of the ancestors My Grandpa - a Gestapo man?