100 Years of Eduard Anthes – Portrait of an Archaeological Preservationist

Hessen – a state of great monuments and important evidence of seven thousand years of history in the heart of Europe. Archaeological ground monuments and diverse finds from different eras are examined, documented and preserved here to this day. These include, for example, the Celtic Prince from Glauberg – a sandstone statue from the Iron Age; the peasant chess piece from Tannenberg Castle, the horseman’s head from Waldgirmes, which can be marveled at in the reconstructed Roman fort of Saalburg, which is a UNESCO World Heritage Site – or the well-preserved Roman baths at the Odenwald Limes near Fort Würzberg. But none of this can be taken for granted. Much of what impresses today could also have remained unrecognized or lost.

In 902, Germany’s first monument protection law was passed in the Grand Duchy of Hessen-Darmstadt, and in 1909 the first full-time monument conservator was appointed: Eduard Anthes. Without his work, Hessen’s rich landscape of ground monuments would not exist today.

Anthes’ enormous knowledge, which he acquired through his educational travels throughout Europe, but also through his extensive regional excavation experience, qualified him for the position as the first full-time archaeological monument conservator. What he managed alone at that time is now the responsibility of an entire office with many employees. Modern technology also facilitates and expands the work of archaeologists, but methods and principles have remained the same for over a hundred years.  Likewise, excavation sites that Anthes already dealt with are still the focus of today’s archaeological investigations.

The Eduard Anthes Prize is the highest endowed and oldest German archaeology prize – awarded by the “Verein von Altertumsfreunden im Regierungsbezirk Darmstadt e.V.” together with the Hessian Ministry of Science and Art and the Hessian State Office for the Preservation of Monuments.

In 2023 it will be awarded for the 20th time for outstanding scientific work on archaeology in the low mountain region.

Link to the full film: https://denkmal.hessen.de/ 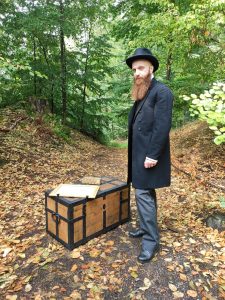