The Science Park of north-east Leipzig’s is a typical institute site, with modern laboratories, green spaces and international research teams. It’s not really something that reminds of the dark chapter of this place. Work is done today for the benefit of people and the environment.

But at this place there were more than 10,000 forced labourers, prisoners of war and concentration camp inmates from all over Europe who had to produce munitions during the Second World War. The Leipzig “Hugo Schneider AG”, originally a lamp and metal products factory, rises because of the largest armaments corporations in the German Reich during the Nazi era.

HASAG’s most famous development is the “Panzerfaust”. The forced labourers are housed in large barracks camps in the immediate vicinity of the factory site. Among them was a subcamp of the Buchenwald concentration camp. There are also other concentration camp subcamps at HASAG’s other production sites in Taucha, Altenburg, Meuselwitz, Schlieben, Colditz and Flößberg. In addition, there are munitions factories in occupied Poland. There, forced labourers and concentration camp prisoners were treated particularly cruelly and in many cases were murdered.

However, the great oblivion surrounding HASAG began in the early 1950s. After the occupation of Central Germany, the Soviets blew up many of the production facilities. The leading employees were able to escape prosecution. They include Wilhelm Renner, Hannelore Kohl’s father, and Edmund Heckler, who set up his own arms company in Bavaria after the end of the war. For some years now, local historians and young historians have been searching for clues in Leipzig, Altenburg and Skarzysko-Kamienna in Poland. They want to make the sites of a murderous war machine visible again. The film from the series “The East – Discover where you live” accompanies history detectives from Leipzig and Altenburg on their unusual journey of discovery.

now in the ARD Media Library 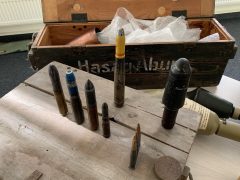 The East - discover where you live