The sound of freedom – new bells for St. Nicolai

It is the largest and the oldest, over 850 years old church in the trade fair city of Leipzig. In addition, along with St. Thomas Church, it is one of the city’s most important tourist magnets and one of the most famous houses of worship in Germany. The Nikolaikirche embodies with the peace prayers of the 80s the end of the GDR and the departure, the Peaceful Revolution, which made today’s Germany possible.
In 2019, the Nikolaikirche was  in special focus for various reasons. After more than 100 years, a gaping hole in this Leipzig landmark will be closed. Instead of the previous three bells, the church will receive a new peal of eight bells, including the large Osanna weighing almost seven tons. Its predecessor was taken from one of the two double towers in 1917 for war purposes and melted down for the construction of cannons.

The documentary follows the process of the bells’ creation, their planning, manufacture and difficult assembly in the center of Leipzig. This thread of the film is complemented by an excursion into the traditional history of bell foundries in Apolda, Thuringia. For over 150 years, many tens of thousands of bells were produced there, which were exported all over the world, but especially to the central German region. In Leipzig’s Nikolai Church, the three existing bells come from Apolda, while the remaining five new ones were cast in Baden-Württemberg. But the bell project, which cost over 700,000(?) euros, is not the only highlight of this year. The film also takes up the 30th anniversary of the Peaceful Revolution by having hitherto little-known participants in the events of 1989 recount their part in the “Miracle of Leipzig” in exciting episodes. For example, the West German photographer Armin Wiech, who on September 4, 1989, takes decisive shots of the brutal Stasi intervention as protesters have their banners snatched from them in the Nikolais church garden. These now iconic shots went around the world at the time. The film meticulously describes their genesis.
Or Thomas Hauf, who as a salaried sound technician in Leipzig’s city hall secretly recorded the speeches of the then mayor and his comrades on October 9, 1989, the desperate plan to “occupy” the Nikolai Church for the peace prayers with comrades loyal to the line in order to get a grip on events after all. And well-known civil rights activists from back then, such as Gesine Oltmanns, or members of the Junge Gemeinde, such as today’s Nikolaiküster Matthias Müller, reflect once again on their courageous efforts in 1989 – but also on the significance that the Nikolaikirche can and should have in today’s politically turbulent and challenging times. 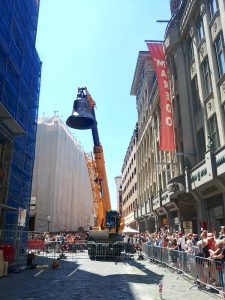 The sound of freedom /