The death of an automobile manufacturer

The town of Hainichen in Saxony. In June 1945 the automobile manufacturer Hans Rasmussen is routed out of bed, arrested and brought to Silesia to a so-called special camp of the Soviet NKVD. He dies little later at the age of 39 due to exhaustion and dysentery. A fate he shares with 3000 other inmates.

Hans Rasmussen is the eldest son of Jörgen Skafte Rasmussen, the founder of the legendary Saxon motorcycle and automobile brand DKW. Thus, he is the scion of one of the most influential families of Central Germany at that time. At an early age his father appoints him the head of the FRAMO factories in Hainichen, where transporters and fancy small cars are produced. In the GDR they are later known as the brand “Barkas”.

Sybille Krägel, the daughter of Hans Rasmussen, wants to know who arrested her father back then – and why he was arrested. Was he guilty or was he the victim of malicious informers? In a new film of the MDR-series “Die Spur der Ahnen” we search together with Sybille Krägel for his traces. Touching memories of a sheltered childhood mingle with a view at the dark side of the past. It’s about NS involvement, war profits and forced labour. The search thus becomes a venture … Is it possible that Sybille Krägel’s father wasn’t just a victim, but also a perpetrator? 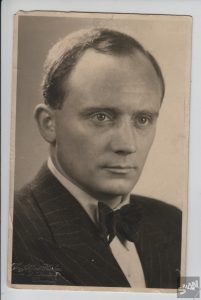 Trace of the ancestors The death of an automobile manufacturer