Dresden and its military past

Dresden’s Albertstadt was once one of the largest closed military cities of Europe. The film shows how it transformed after the peaceful revolution into a popular urban district for start-ups, service providers and culture projects.

From 1877 on a city for 20,000 soldiers is built along Dresden’s Heerstraße. To this point, the area between Neustadt and Dresden Heath had been a hunting ground for the city’s aristrocracy. Götz Krüger, born in Dresden, knows the history of Albertstadt like no other. He explains how the buildings have changed. Several companies settle in the halls of the area around the power plant after the foundation of the GDR. However, many of them go bankrupt after the fall of the Berlin Wall. In 2004 Klaus Eckhard from Bavaria has an idea. Using the old factory halls he develops a new area for start-ups, event catering and exhibitions, and calls his project “Zeitenströmung”.

The photographer Martin Hertrampf has documented this forgotten and repressed history. He photographically captured the life of the Soviet soldiers at Albertstadt from the mid-eighties on. Town chroniclers, investors, event planners and soldiers guide the viewer of “Dresden and its Military Past” through an unknown and spectacular new Albertstadt.

The story of the marvelous change of Dresden’s Albertstadt is the beginning of a four-part season, which is a part of the series “Der Osten – Entdecke, wo du lebst”. Apart from Albertstadt, the season shows through the examples of  Görlitz, Arnstadt and Ascherleben how profoundly the living environment in East Germany has changed over the last decades. Especially the first years after the German reunification were characterized by an abrupt decline of the East German industry. But wherever industrial cores were preserved and wherever new industrial sites established, there was hope for new jobs, and a new life attitude arose. 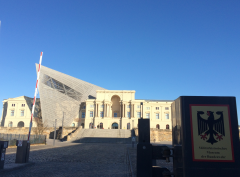 miraculously changed:
The Albertstadt of Dresden