Mentally ill people played no role in the public sphere, in literature, art and film in the GDR. On socialist holidays or when prominent politicians visited, there was a curfew for psychiatric patients until 1989. The history of GDR psychiatry is characterised by enormous contradictions. On one hand, every effort was made to banish the mentally ill from public life. On the other hand, they were more integrated into normal working society than in the West, if only because of the general labour shortage. Despite centralised management and intensive use of state security, however, there were enormous differences in the treatment of the sick due to dedicated doctors and nurses. In all psychiatric institutions in the GDR, however, there was a glaring shortage of staff, spatial capacity, equipment and medication until 1989. How did this go together with the new socialist people of the GDR, who were supposed to find happiness, contentment in collective discipline and equality, and the mentally ill, for whom chaos, disorder and delusion ruled their lives? Was there a communist psychiatry? The film documents the peculiarities of GDR psychiatry and sheds light on surprising similarities and connections that existed with “soul work” in the Federal Republic. It also asks how psychiatry in East Germany looks today, thirty years after the 1991 report of the commission of the Federal Ministry of Health. 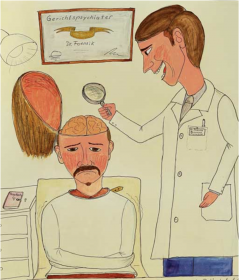 Psychiatry in the GDR (working title)