… you learn that a relative of yours is said to have been a member of the SS during World War II and – even worse – to have worked in a concentration camp as a guard? A relative you were fond of as a child, but whose past remains pretty much unknown even after his death?

That is exactly what happened to Thomas Czerny from Cottbus with his great uncle Karl, and he sets out on a search in order to shed some light on his uncle’s life. A courageous step, as it remains a taboo topic in some families to this day. It is a very personal journey from Rostock to Nordhausen, via Berlin and Usedom and back to the Harz Mountains. A journey, that takes us deep into the history of German missile production during World War II. 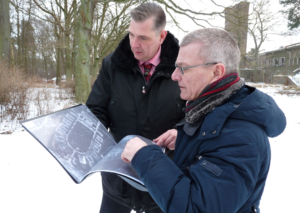 Trace of the ancestors A concentration camp guard in my family?